Peter has an agricultural/farming background. Born at Wudinna SA then moved when 4 years old with farming parents Boss and Peg to a Soldier Settlement farm near Keith. Family involvement with horses can be traced back to his Uncle John McInnis who is a legendary buck jumper and his Grandfather Angus McInnis a WW1 Light-Horseman. Childhood memories of riding the farm horses Chummy & Tinker later transformed into reality with the purchase of his first cutting horse in 2000.

He attended his primary schooling at the Keith Area School then completed secondary education at the Urrbrae Agricultural College in Adelaide. His Father and older brother Terry already worked the family farm so it wasn’t long before Peter took charge of the stock truck. This was to be the humble beginnings of his now very busy and diverse business ‘Bordertown Haulage and Trading’, involving interstate bulk haulage with 7 vehicles, grain trading and 3 grain/fertiliser storage depots. He also sits on the State Board of SARTA (South Australian Road Transport Association).

Pete re-united with his childhood sweetheart Di in 1995 who also brought horses back into his life! He was now busier than ever, but had always been a ‘cowboy’ at heart. In 2005 he was instrumental in reviving the South Australian Cutting Horse Association and held the position of president for 8 years. He is also a member of the newly formed NCHA Breeders Incentive Advisory Committee. In 2013 their ‘horse breeding capers’ would be named ‘Turpentine Park Quarter Horses’ and so the very serious hobby became a Registered business. 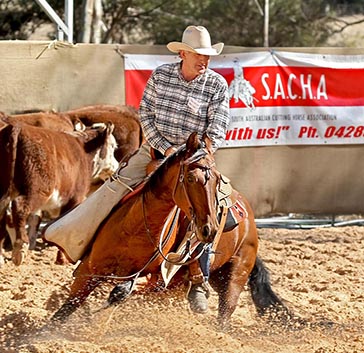 Equipped with very broad skills and sound knowledge base, his role in their Quarter horse stud is diverse, covering property improvements and maintenance, keeping horses fit and tuned, handling youngsters, attending to their hoof-care and helping with animal husbandry (whilst still managing Bordertown Haulage and Trading).

Pete is well known as a natural ‘people person’, and thoroughly enjoys networking and forming social and business relationships. Family time is cherished with adult children Angus, Jack, Brigette (who resides in France) and 3 grandchildren. Due to work commitments it is extremely difficult to ‘get away’ but he still manages to compete in several cutting events at State and National levels as a Non Pro.